It’s important for computer users to lower down the overall temperature of their CPU, considering that running a computer at high temps can decrease the overall life span of the CPU and it can also damage components such as the PSU and the Motherboard.

As a user, you should do almost everything that you can so you can lower down the temperature of your CPU, but what exactly can you do?

Below, we are going to list down some of the most basic things that you can do inside your house so you can lower the CPU temperature of your desktop.

6 Simple Things You Can Do To Lower Your CPU Temperature

The first thing that you can do is clean the case of your computer, especially if you have never cleaned it before.

We would suggest you to watch a video on the internet on how you can clean your case without damaging any of its parts. Here is a video that you can go with:

remember, it’s important to follow every single thing that is mentioned in the video above, considering that your single mistake can end up disastrous.

Another thing that you can do on your own in order to lower your CPU temperature is change the thermal paste of your CPU.

Yep, this one is important.

If you have never changed the thermal paste of your computer and you have owned the computer for like 4 years now, it’s important to change it so you can do your part in keeping your CPU on the colder side.

Here is a video that you can watch to get proper help in changing the thermal paste:

The third thing that you can do is buy a better cooler and install it by yourself. Doing this simple thing can make a huge difference for you and in lowering down your CPU’s temperatures if they are getting too high.

Before you buy one, try to do the 2 things that we mentioned above. They are cheaper and can often lead to around 5 to 10 degree changes if you do them right.

4. Stop putting too much load on your CPU at once

The fourth thing that you can do is to stop putting too much load on your CPU at once, considering that the more load you put at it, the more likely you are to get higher temperatures.

So what can you do in this one?

All you would have to do is stop opening a bunch of applications at once, instead, try opening the lighter ones together and avoid using the heavier ones together.

5. Change the location of your Cabinet

Another possible reason could be the location of your cabinet.

The best location for your cabinet would be on top of your desk and a fan should be aimed at it.

The last thing that we would suggest you to do is add more fans in your cabinet.

Try to have a pull and push configuration in your desktop so you can get better temperatures while using it for gaming, streaming, or even internet browsing. 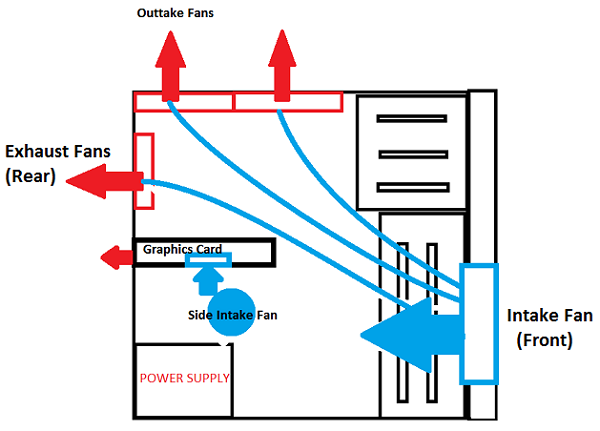 Also, try to add fans that have more Rotations Per Minute. The more they spin, the more air they are going to bring in!

Did we miss out anything in the list above? Let us know what we missed out by leaving a comment in the comments section below!